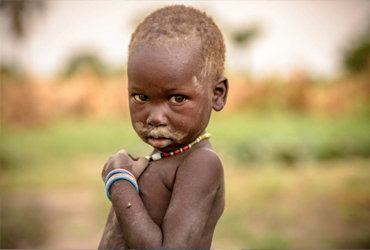 South Sudan is one of the Eastern Africa country where poverty is deeply rooted in society. More than 90% of the population has a daily income of less than 1 USD. The majority of the community are living on agriculture which was constantly affected by drought and continuous conflict in the country. These directly impacted the children, made them unable to go to school, lack nutrition, access to healthcare, sanitation, etc. The conflict in the country caused schools almost non-existent. In South Sudan 1 in five children attend school and only less than 1% finish their primary school. More than 91% of girls are illiterate in South Sudan. It is the lowest rate in the areas of the second school in the whole world. In some areas, classes take place in the open.

In the areas of healthcare, children in South Sudan are chronically malnourished, have the greatest challenge in the areas of health care as 75% of South Sudanese do not have access to healthcare. Besides, 80% of South Sudanese have no access to toilets. The situation of refugees and displaced children in South Sudan is worrying as they are vulnerable to forced recruitment into various armed forces as we see in different reports. Basic needs of children are also neglected. Hope 4 World children are committed in providing healthcare facilities to the South Sudan healthy centers and government clinics to meet the need of the community.